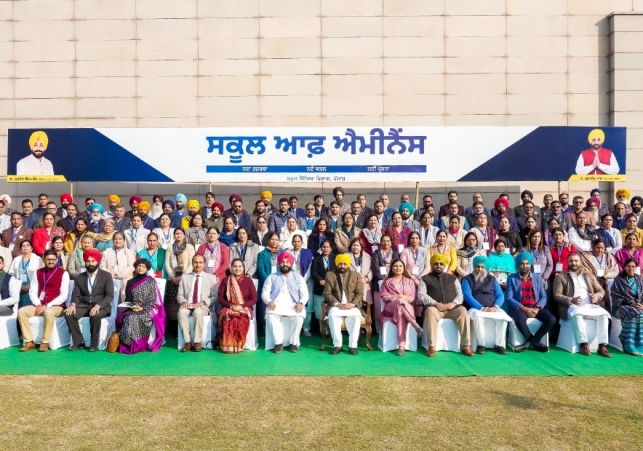 Says their negligence jeopardised the future of youth

These schools to be named after great freedom fighters and martyrs

SAS Nagar (Mohali), January 21- Describing the ‘Schools of Eminence’ as a revolutionary step for ensuring golden future of the students, the Punjab Chief Minister Bhagwant Mann today said that it was a giant leap forward towards becoming a real  frontrunner in field of education.

The Chief Minister, while addressing the gathering during opening of School of Eminence here today, said that during the stints of previous governments Punjab was shown front ranking state in education only on paper. However, he said that now the state will really lead the country in imparting quality education to the students. Bhagwant Mann bemoaned that the Government schools were striving for basic infrastructure and manpower but the previous governments misled the people by presenting forged figures.

The Chief Minister said that as these governments ignored an important sector like education so the state behind in this field. He said that several students were forced to leave their education in between thereby ruining their bright future. Bhagwant Mann said that due to lack of resources and laxity of previous governments girls were not able to pursue their education.

The Chief Minister said that unfortunately those who presented the fake figures were not from other states but were the politicians hailing from Punjab only. Bhagwant Mann asserted that his government has made a firm commitment to impart world class education to the students. He said that the day is not far when the students from state will scale new heights across the globe after getting education from these Government schools.

The Chief Minister said that these leaders wanted to give a push to their political career that too at the cost of compromising with the future of the students from weaker and underprivileged sections of society. He said that due to regressive policies of these leaders the state has lagged behind in fields of health and education thereby jeopardising the progress of youth. Bhagwant Mann said that wise people of state had understood the bad intentions of these politicians due to which they have been routed out and chance has been given to fresh faces.

The Chief Minister said that these 117 schools of eminence being set up in 23 districts of state are temples of quality education. He said that the purpose of setting up these schools is to give wings to the dreams of the bright students of government schools. Bhagwant Mann envisioned that these schools will enable the students to compete with their convent educated peers in various competitive exams across the country.

The Chief Minister said that these schools are being set up to cherish the aspirations of our great freedom fighters. He also announced that to name these schools on great martyrs and national leaders who had laid down their lives at altar of their motherland. Bhagwant Mann said that this initiative will be a real tribute to these iconic leaders who steered the country to freedom.

The  Chief Minister emphasised that these schools will groom the students for futuristic needs and emerge Punjab as role model in education sector across the country. He envisioned that the day is not far when these government schools will provide better education  than the private schools. Bhagwant Mann said that the parents of students will now prefer to send their children in these schools than the private schools.

The Chief Minister said that the teachers will be the foot soldiers to usher in a new era of education reforms in the state. He said that his government has decided to send 36 teachers from state to Singapore for updating their expertise. Bhagwant Mann said that the motive is to ensure that teachers are able to learn about the advanced practices prevailing across the globe in education sector.

Addressing the gathering, Education Minister Harjot Singh Bains said that this is the dream project of the Chief Minister. He said that with every passing day Punjab is witnessing new reforms in education sector.  Bains said that these schools will help in opening the doors of competitive world for the students of Government schools.

On the occasion Cabinet Minister Anmol Gagan Mann and others were also present.