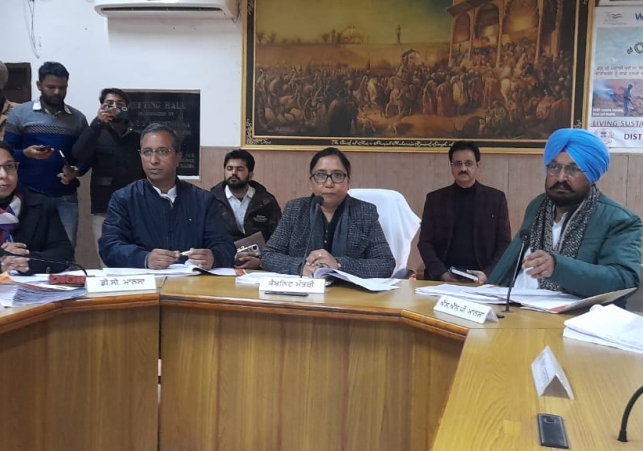 Absolutely no tolerance for corruption in any government department -Cabinet Minister

The Punjab government led by Chief Minister Bhagwant Singh Maan is committed to provide quality health facilities to the people of the state, education and maximum employment to the youth as well as the overall development of Punjab.  The Minister of Social and Justice Empowerment, Minorities, Social Security, Women and Child Development Mrs. Baljit Kaur held a meeting with various departmental officials at the local Bachat Bhawan today to review the progress of the ongoing development work and welfare schemes  in the district.

Cabinet Minister Baljit Kaur instructed the administrative officials that the Punjab government is committed to provide transparent and corruption-free administration to the people.  She asked all the departmental officers and employees to perform their services with full honesty and diligence.  She said that it should be ensured that the benefits of the public welfare schemes being run by the government are conveyed to the eligible and needy people and that the people can get the benefit of the administrative services without any difficulty.  She said that the goal of the Punjab government is to make the state the best region in the country in basic areas like health and education, for which work is being done on a large scale to improve the condition of schools and hospitals.

The Cabinet Minister issued orders to all the departmental officials to ensure the participation of the MLAs of the respective constituencies regarding the projects being completed in the district and the camps being organized for public welfare schemes on the instructions of the Punjab Government.  She said that the grant received by the government for the development works of each constituency should be used in a transparent and planned manner.  During the meeting, MLA Sardulgarh Mr. Gurpreet Singh Bananwali, MLA Budhlada Mr. Budh Ram, MLA Mansa Dr.  Vijay Singla informed the Cabinet Minister about the welfare schemes and development works related to the constituency.Talking to the media on this occasion, the Cabinet Minister said that the work is under process to deal with the sewerage problem in Mansa city, which will be solved very soon.  She said that the amount of Shagan Scheme due to the needy families on the girl's marriage will be released soon.  She said that due to the reduction of ration card holders who are found to be wrong in the district, the benefits of the Atta Dal scheme of the Government will be provided only to the needy families.  Answering a question, the Cabinet Minister said that the Aam Aadmi Party Government is committed to rooting out corruption in Punjab and corruption will not be tolerated in any Government department.