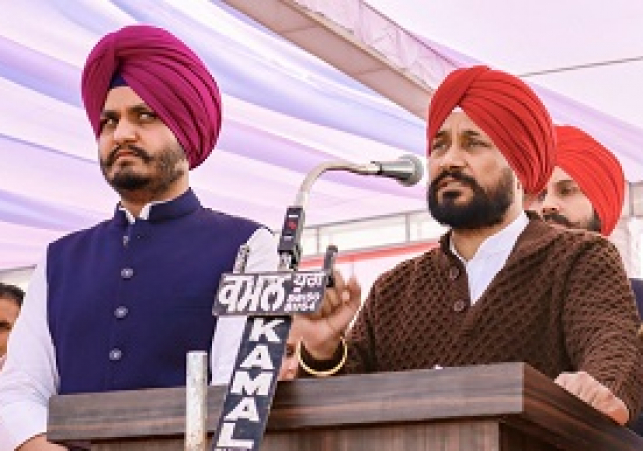 The Punjab Chief Minister Charanjit Singh Channi on Tuesday inaugurated slew of development projects worth Rs. 25 crore comprising a 100 bedded district hospital at a cost of Rs. 20.72 crore besides newly constructed Shaheed Udham Singh having cost of Rs. 5 crore. He also announced a medical college in Fazilka for giving boost to the medical services and studies in this border district so as to ensure Medicare facilities to the people.

Taking on the Shiromani Akali Dal (SAD) leaders, the Chief Minister said that it was the Badal family which was the progenitor of the mafia dom in the State indulging in open loot of the resources of Punjab. "The connivance continued even during the regime of Captain Amarinder Singh but now people's government has taken over with the resolve to finish off mafia raj", said Channi.

Severely criticizing Arvind Kejriwal and his bunch of outsiders from the other states, the Chief Minister disclosed that the AAP Convenor couldn't undertake even a single development centric work in Delhi however these people holding malice in their hearts, are making tall promises to the people with the clear agenda to mislead them. But the sensible people of Punjab won't fall prey to the trap of the outside elements and would keep the reins of power in the hands of the sons of the soil, added Channi.

Further, the Chief Minister pointed out that the main aim of his government is to provide top notch facilities in the health and educational sectors to the poor and middle class people. He also declared to commence new job oriented courses in the Post Graduate Government College in the city.

Assuring to conserve the three historically important sites of Fazilka, Channi informed that the committee of the concerned department would visit these places and frame a definitive policy for their preservation.

Strongly advocating the propreitary rights on lands to the farmers of the border areas, the Chief Minister said that the State Government, as per the demand of these farmers, would award propreitary rights to those farmers who have paid the price of the land. Likewise, the Chief Minister also promised to take up the issue of compensation to the farmers whose land lies beyond the barbed wire, with the Union Government apart from giving the compensation soon with regard to the crops damaged by the natural disasters.