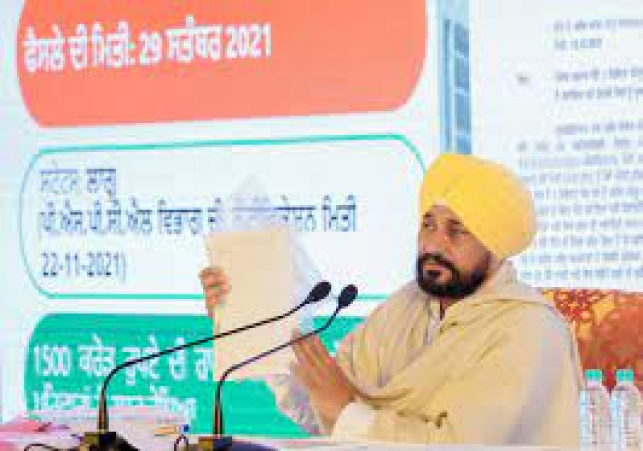 ·        PRESENTS REPORT CARD OF HIS GOVERNMENT’S PERFORMANCE OF 72 DAYS

Chandigarh, December 2: Punjab Chief Minister Charanjit Singh Channi on Thursday dared the opposition to list a single decision or an announcement during his tenure, which has not been implemented on the ground.

Reiterating his government’s firm commitment to implement each and every decision in the right earnest, CM Channi categorically said that notwithstanding the time constraint his government would leave no stone unturned to resolve the remaining issues so as to cherish the peoples’ aspirations to their satisfaction.

Training guns at AAP Supremo Arvind Kejriwal for indulging in mudslinging, CM Channi said though he liked criticism but criticism for the sake of mere criticism is not only unethical but undesirable. He advised Kejriwal not to be envious of his pro-people agenda rather implement his model of welfare and development in his own state Delhi. He said, “Punjab government is not ‘Channi Sarkar’ but a ‘Changi Sarkar’ as we have effectively delivered the goods to win over the trust of common man.”

While presenting his government’s report card related to status of implementation of government decisions/announcements made during past 72 days since he had assumed the office on September 20, 2021 to till date, CM Channi said as many as 60 decisions have been implemented in the letter and spirit. CM Channi said, “In view of my government’s superb performance, now I deserved to be known as ‘Vishwasjeet Singh’ instead of ‘Elanjeet Singh’ as earlier addressed by the opposition.”

In a presentation, CM Channi said that several path-breaking decisions have been taken in the Power sector including waiver of arrears of domestic electricity consumers upto 2 KW load thus benefitting nearly 20 lakh families with a relief of Rs. 1500 crore. Likewise, Power prices have also been reduced by Rs. 3/unit for domestic consumers with load up to 7 KW benefitting over 69 lakh families with a relief of Rs. 3316 crore per year. Apart from these, his government has also decided to abolish Power Purchase Agreements (PPAs), for which the Punjab Vidhan Sabha has already passed Bills in this regard thus paving a way for its abolition. In a bid to ensure uninterrupted power supply at affordable rates, the Punjab government has decided to purchase 250 MW Solar Power at the lowest ever rates in the state i.e. Rs. 2.33 to 2.34/unit, for which the tenders have been accepted by the state government. The said price is 87% less than earlier PPAs done by the previous SAD-BJP government @ Rs. 17.91/unit.

On the front of Rural Development, CM Channi said under Mera Ghar Mere Naam scheme for proprietary rights within Lal Lakir, 4846 households have been benefitted across 55 villages, while all the households within Lal Lakir would be covered by December 2022. Similarly, allotment of up to 5-marla plots to the eligible families in rural areas is being undertaken in a mission mode. As many as 30,000 Sanads have already been delivered within short span of two months.

Acceding to the long pending demand of the rural residents across the state, CM Channi said his government had also waived off the pending electricity arrears worth Rs. 1168 crore in respect of water supply schemes of Panchayats adding future electricity bills of such water supply schemes would be paid by the government. Likewise, monthly water service charges for Rural Water Supply (RWS) connections have also been reduced from Rs. 166 to Rs. 50 thus benefitting all rural households getting piped water supply in the villages.

In the Urban sector, CM Channi informed about the decision for making payment of future electricity bills of water-supply connections within urban areas by the state government. More than 25 lakh families have been given a relief of approx Rs. 700 crore for waiving of arrears of Water Supply and Sewerage in urban areas. Similarly, monthly water-service charges for urban water-supply connections have also been slashed from the range of Rs. 105-250 to Rs. 50 in order to benefit all urban households with piped water supply. Likewise, monthly water-service charges for water-supply connections in PUDA areas also reduced to Rs. 50. Besides, the Local Government department has already notified to reduce the rate of interest on enhancement amount of allottees of improvement trusts from 15% to 7.7% per annum.

The decision of OTS for settlement of non-compoundable violations in buildings constructed in municipal areas has also been implemented after getting the Bill in this regard passed in the Punjab Assembly.

Under BASERA Scheme, proprietary rights have been given to slum dwellers in mission mode. As many as 12,428 P-Cards have been approved, of which 9,704 P-Cards already distributed. With this decision more than 80,000 families to be benefitted within a year.

In order to ensure government jobs to Punjabi youth, the state government has decided to make Punjabi mandatory up to 10th level for all jobs under Punjab Government/Boards/etc.

To perpetuate the legacy of legendary statesman and an architect of Indian Constitution Dr. BR Ambedkar, CM Channi said Ambedkar Bhawan would be constructed in all districts across the state. A sum of Rs. 10 crore has been sanctioned for infrastructure and amenities around Bhagwan Parsuram Mandir at Khati (Phagwara). The process of additional one lakh new ration cards under the 100% State-sponsored NFSS Scheme is under progress.

Several labour friendly decisions have also been taken by the state government including; to provide Rs. 3100 as special assistance for 3.7 lakh construction workers. More than Rs. 115 crores to be given to the beneficiaries, of which Rs. 98.74 crores have already been disbursed under this decision. Besides, minimum wage has also been increased by Rs. 416 per month from Rs. 8776 to Rs. 9192 for unskilled labour.

Listing achievement of Transport sector, CM Channi said 425 new bus routes would be established besides issuing 1406 permits to the state’s unemployed youth. Apart from this, free bus service for pilgrims travelling to Kartarpur Sahib has also been started.

On the School Education and Student Welfare front, CM Channi said school uniforms would be given to all the remaining students in government schools.

In a bid to strictly enforce the implementation of Punjabi as compulsory subject for all students of 1st to 10th Class across the state, CM Channi said that Punjab Learning of Punjabi and Other Languages Act, 2008 has been passed in the Vidhan Sabha to enhance the penalties from Rs. 25,000, Rs. 50,000 and Rs. 1 lakh to Rs. 50,000, Rs. 1 lakh and Rs. 2 lakh respectively for contravening the provisions of the said Act.

Likewise, Chief Minister Scholarship Scheme has been implemented in Higher Education for government colleges to help the bright poor students particularly of general category besides helping to further improve the Gross Enrollment Ratio (GER) in the Higher Education which is very at low at present.

More than 10,000 employees would be benefitted with the decision for making aided and affiliated college managements accountable with the provision of appeal for employees.

CM Channi also disclosed that Bhagwan Parshuram Chair would be established at Jagat Guru Nanak Dev Punjab State Open University. Likewise, the state government has also decided to set up Guru Ravidas Chair, Bhagwan Balmiki Chair and Sant Kabir Sahib Chair in Punjabi University, Patiala. Apart from these, Bhai Jeevan Singh (Bhai Jaita Ji) Chair and Makhan Shah Lubana Chair is also coming up at Guru Nanak Dev University, Amritsar. Ambedkar Museum at IKGPTU, Kapurthala is being established with a cost Rs. 100 crore. The pending loan worth Rs. 150 crore of Punjabi University, Patiala has been taken over by the state government besides the annual Grant-in-Aid for the University increased from Rs. 114 crore to Rs. 240 crore per year to make the University self-sustainable to impart higher education to students efficaciously. Research Centre on the legendary epics of Ramayana, Mahabharata and Bhagavad Gita would be established shortly.

Bringing an end to the sand mafia, CM Channi said that sand and gravel pit-head rates have been reduced from Rs.9/cubic feet to Rs. 5.5/cubic feet. No permission and royalty would now be required by farmers for digging up their own land up to 3 feet.

On Agriculture and Farmers Welfare front, CM Channi said the state government has decided to pay additional 10% compensation over and above to farm labourers in pink bollworm affected cotton crop in Malwa region. The government is already in process to provide compensation @ Rs 17,000/acre to farmers due to pest attack on cotton crop. Sugarcane farmers would be paid
Rs. 35/quintal through Direct Benefit Transfer (DBT) for Year 2021-22. Punjab Contract Farming Act of 2013 has been repealed in the Special Session of Punjab Vidhan Sabha. Similarly, anti-farmer provisions of APMC Act of 1961 introduced in 2017 have been too repealed to the advantage of farmers. It is for the first time that Cash Credit Limit (CCL) has been released by Government of India before the commencement of the paddy procurement season.

On the Health and Wellbeing front, CM Channi said 15 lakh additional families would be covered under Ayushman Bharat- Mukh Mantri Sarbat Sehat Bima Yojana. A scheme ‘Mukh Mantri Motiyan Mukt Punjab’ has been launched on November 26 by organizing 330 Camps thus benefitting 14,881 patients. As many as 6061 cataract cases were identified and 1540 patients operated for free in four days.

Reiterating his government’s commitment for the welfare of employees, CM Channi said Dearness Allowance (DA) has been increased by 11% for employees and pensioners. 6th Pay Commission is being implemented for pensioners retired on or after January 1, 2016. 6th Pay Commission ensured minimum 15% increase in salary of employees recruited after January 1, 2016. Similarly, the government has banned re-employment after retirement to create more job opportunities for the youth. The state government has also decided to provide family pension to employees covered under NPS, in case of death in harness. Conceding the long pending demand of contractual employees, CM Channi said that the process to regularise the services of over 36000 such employees is already underway. Besides, recruitment of Group D/Class IV employees would be done on regular mode in future.

Assuring fulsome support and cooperation to trade and industry, CM Channi said his government has taken a slew of industry friendly initiatives including; abolition of Institutional Tax involving a relief of more than Rs. 250 crore, simplification of CLU procedure for industrial units, reduction of fixed charges of medium scale industries by 50%, OTS and Interest Relief for defaulters of PSIDC, PFC and PAIC and deemed approval in cases of expansion for MSMEs.

In a bid to reduce burden of taxation on people, CM Channi said petrol prices have been reduced by Rs. 10/litre and diesel by Rs. 5/litre thus passing the relief to the tune of Rs. 3200 crore to the citizens of the state. Apart from this, VAT Assessment of more than 40,000 cases has been waived-off and VAT demand created in 8000 cases to be settled at 30% of the tax due.

Prominent amongst others who were present on the occasion included Deputy Chief Minister Sukhjinder Singh Randhawa, Revenue Minister Aruna Chaudhary besides senior Civil and Police officers.