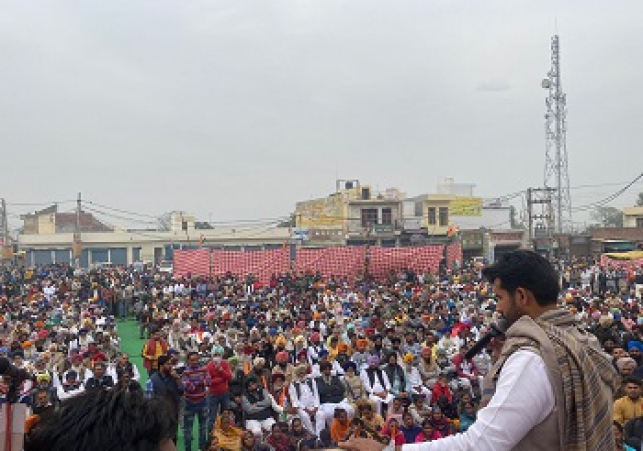 CAPT AMARINDER A STATE LIABILITY, PUNJABIS WILL TEACH HIM AND BJP A LIFETERM LESSON IN 2022, SAYS RA

CAPT AMARINDER A STATE LIABILITY, PUNJABIS WILL TEACH HIM AND BJP A LIFETERM LESSON IN 2022, SAYS RAJA WARRING

HOLDS FIRST SESSION OF 'KHULI CHARCHA WARRING DE NAAL' AT GHANOUR, REITERATES PUNJABIS HAVE MADE UP THEIR MINDS TO RE-ELECT CONGRESS

Reiterating the party commitment to bring every offender to book, the Transport Minister Amarinder Singh Raja Warring on Wednesday said that former Chief Minister Captain Amarinder Singh is a state liability and the people will teach both him and BJP a lifetime lesson in forthcoming polls.

Asserting confidence in the pathbreaking policy initiatives undertaken by the Chief Minister Charanjit Singh Channi-led government, Warring said that people of Punjab have seen what could be achieved with true political intent and they have made their mind to re-elect Congress in 2022 with a thumping majority.

Scotching all talk of any opposition to Congress regaining power in the state, Warring said Kejriwal's shocking double standards on farmers issues have exposed him fully. Punjabis will never forgive Kejriwal for backstabbing our farmers by passing one of these 3 black laws in Delhi Assembly, he said.

Interacting with party cadre and public here during the first session of 'Khuli Charcha Warring De Naal' here after launching the Ghanaur Bus Stand renovation works, he said that those who committed fraud with Punjab by trying to destroy our farmers will have to pay for their misdeeds. The public interaction programme is first of the Minister's Series planned by the All India Congress Committee (AICC) ahead of the 2022 polls.

This is the same Kejriwal who had openly promised to arrest Majithia within 15 days of coming to power and then had expressed a shameless Sorry that too through a newspaper published apology, Warring said.

Training his guns at Captain Amarinder Singh for criminally colluding with Badals to ruin Punjab, Warring said precious 4 and half years were lost due to former Chief Minister's illegal pact with Parkash Singh Badal and Sukhbir Badal.

Exhorting party cadre to buckle up ahead of crucial assembly polls, Warring underlined that the team of Chief Minister Charanjit Singh Channi and PPCC President Navjot Singh Sidhu will lead Punjab towards a trajectory of unprecedented prosperity and growth. The specially curated interaction programme would be held at three locations of Kharar, Raikot and Sahnewal tomorrow.

Lambasting Badals for looting Punjab by spearheading different mafias, Warring said he is not afraid of anyone when it comes to taking on those who shackled state's bright future by eating up its resources through tax evasions.

Had Shaheed-E-Azam Bhagat Singh, or Shaheed Kartar Singh Sarabha or Udham Singh Ji thought of repurcussions we would not have made a great nation, Warring said the names of all these great martyrs evoke reverence and awe everywhere across the globe.

Badals are the richest Sikh family, but how many people know them outside Punjab said Warring said castigating former Deputy Chief Minister Sukhbir Singh Badal for murdering the soul of Punjab's agriculture and then shamleslsely claiming to be their saviours.

It is our collective commitment to ensure ensure holistic development of all sections of state, Raja Warring said urging the partymen to proactively take the Channi government's achievements to grassroots.

Warring, who has been on mission mode to ensure fiscal revival of the state Transport Department had taken over the reins as Cabinet Minister on September 29.

Highlighting the Transport Department's achievements in just last two months under him, Warring said the increase of Rs 1 Crore daily in revenue of the Department has been possible by enforcing government mandate against tax offenders including the Badals who plundered the state for their personal gains.