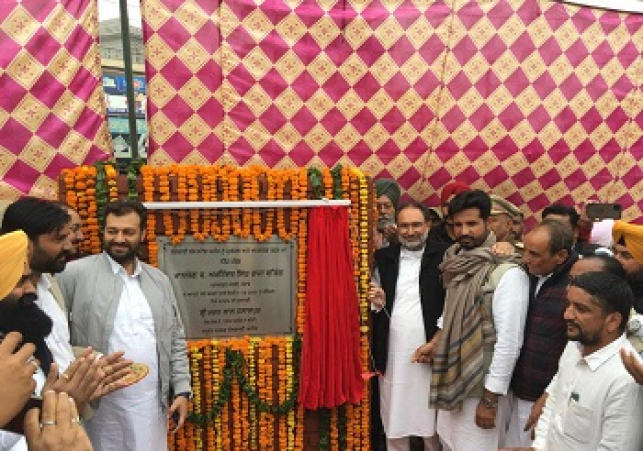 DIRECTS DEPARTMENT TO COMPLETE RENOVATION IN RECORD TIME OF ONE MONTH

Fulfilling the long pending demand of the area residents, the Punjab Transport Minister Amarinder Singh Raja Warring on Wednesday initiated the upgradation work of Ghanaur Bus Stand to be completed at an cost of Rs 83.50 Lakhs sanctioned in advance by him. The Transport Minister directed the department to complete the renovation work in a record time of one month to ensure people start using the upgraded facilities at the earliest.

Addressing the gathering on the occasion, Warring said the project was high on his priority list after he took over the reins of the Ministry and he had asked the Department to speed up the process of commencing the works after he had advance-sanctioned the requisite funds.

Lauding the Department for making all-out efforts to ensure Ghanour gets the upgraded Bus Stand, Warring said tendering process has been completed and the project has been assigned to Department of Rural Development and Panchayats.

I know this project was hanging fire for last two years for one reason or the other, Warring said assuring the citizens of Charanjit Singh Channi-led government's proactive approach towards overall development. It is my duty as a Minister to ensure development of each and every part of Punjab through my department, Warring said.

The upgradtaion of the Bus Stand entails 5 bays for streamlining of passenger entry into buses especially for the elderly citizens, Warring said adding besides the new boundary wall, clean drinking water and toilet facilities would be set up.

Dedicated CCTV Cameras, high mast lights, generator sets in addition to the separate male and female rest rooms, cabins with proper signages would form part of the new facilities, a spokesperson of the Department later shared.

Speaking on the occasion, the MLA Ghanaur Madan Lal Jalalpur thanked the Transport Minister for latter's personal intervention in ensuring the Bus Stand work starts at the earliest.

Every citizen of Ghanaur is forever indebted to Raja Warring for fulfiling the long pending demand of the area, the MLA Madan Lal Jalalpur said adding that the works undertaken by the Channi Government would ensure Congress party returns to power in 2022 too.