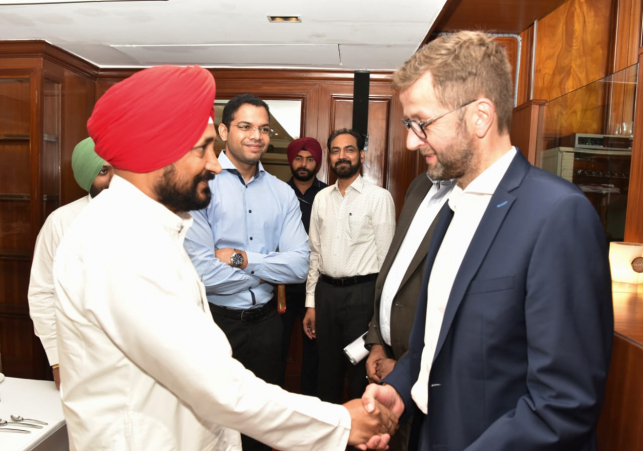 Assures of fulsome support for ease of doing business

Chandigarh, October 23: As a precursor to two-days Progressive Punjab Investors Summit-2021 on October 26 & 27, the Punjab Chief Minister Charanjit Singh Channi on Saturday in a meeting met delegation of German Companies operating in the state.

Notably, the Chief Minister had similar interactions few days back with the Captains of Industry based in Punjab and is again meeting more industrialists on Monday for their valuable suggestions and feedback before the Progressive Punjab Investors Summit.

Pointing out further, the Chief Minister said that the State actively promotes business, trade and infrastructure development in partnership with the Industry. Channi said the investments of over INR 99000 Crores reflects the enormous confidence and trust in the conducive and sustainable ecosystem in the state to boost industrial activity and create humungous entrepreneurial opportunities and jobs for State's youth. He impressed upon the industry from the length and breadth of the world to choose Punjab as a progressive partner being the most preferred destination to realise their dreams.

Channi further said that these consultations with industry would go a long way in improving the delivery of governance thus ensuring ease of doing business in the state.

During the meeting, representatives of Company shared their hands on experiences of operations in Punjab. President Vibracoustics India, auto component manufacturer Mr. Jagminder Bawa informed that the overall efficiency of operations in their Punjab plants is at par with their another plants located in Germany. Meanwhile, MD, Claas India, agri implement manufacturer Mr. Sriram Kanan apprised the Chief Minister that robust connectivity and peaceful labour relations without domicile condition in Punjab are very encouraging for the Industry. MD, Verbio India, biomass to CNG plant  Mr.Ashish Kumar informed the Chief Minister about the progress of their first plant coming up in Sangrur wherein they have already Invested more than Rs.200 Cr as compared to their initial plan of about Rs.70 Cr. He also mentioned that Verbio will replicate the same model at multiple locations in the Punjab with the support of PEDA and Invest Punjab in near future. The Chief Minister assured that the state government would extend fulsome support and cooperation to the MNCs and directed CEO Invest Punjab, Mr.Rajat Agarwal, to extend timely facilitation to all such international and national companies in expanding their businesses in the state.