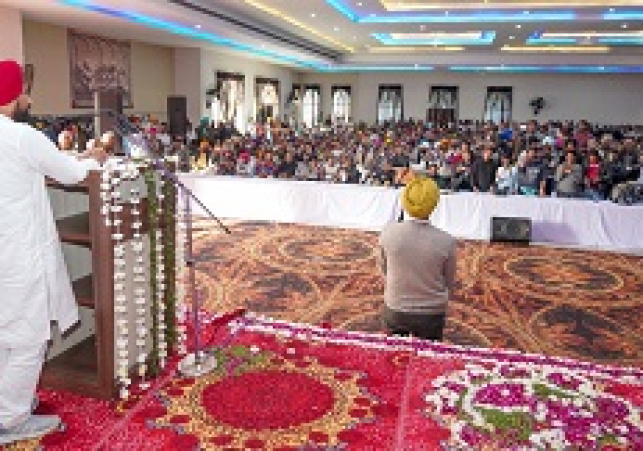 Training guns against the Delhi Chief Minister Arvind Kejriwal, the Chief Minister described him as rumour monger who is least bothered about the state. He said that Kejriwal is only making hollow promises whereas his government is delivering good governance and clean administration to the people. CM Channi asked the people to not get misled by the tall claims of Kerjiwal and company.

The Chief Minister further said that an elite and unholy nexus of politicians across party line had excluded power from common man just to loot Punjab. He said that the members of this elite group have a common bond in form of their own vested interests to loot the state adding that they have been willfully doing this so by enjoying the fruits of power in game of musical chairs where the ruler changes after every five years but power remains in their hands. However, CM Channi said that now this nexus has been broken and the power is with the common man.

The Chief Minister said that people of Punjab know that Petrol and diesel was cheapest in Punjab in entire northern region and likewise rates of power are the cheapest in the entire country. He said that his government has already reigned in the sand and transport mafia in the state adding that next turn is of the cable mafia. CM Channi said that the Cable mafia is a puppet in the hand of Badal family which is charging exorbitant rates from people adding that this mafia will be broken soon.

The Chief Minister said that he was fortunate that Congress leadership has bestowed him this service to serve the state. He said that he is working to resolve the issues that are faced by every common man of the state. Listing the several pro-people initiatives taken by his government, he said that Power bill arrears worth Rs. 1500 crore have been waived, Power rates for domestic consumers have been reduced by Rs. 3 per unit, Bills to the tune of Rs. 1200 crore have been waived off in respect of motors in rural areas, water charges brought down to Rs. 50, Rates for sand have been reduced to Rs. 5.50 per cubic feet and Punjab Government is bearing Rs. 35 as part of cost sharing out of increased Rs. 50 of Sugarcane prices while the private mills now only have to bear Rs. 15. CM Channi said that not only this but several other path breaking decisions will be taken in coming days too.

The Chief Minister said that all the decisions taken by his government are being implemented immediately to provide relief to people. He said that the opposition is baselessly levelling allegations in dearth of any issue. CM Channi said that on ground decision is benefitting the people.

In his address Cabinet Minister Rana Gurjit Singh said that the Chief Minister had taken several path breaking initiatives for well being of people and progress of Punjab. He said that the Chief Minister has a special concern for the state and its people. Rana Gurjit Singh described the CM Channi as the real Aam Aadmi who is always available for the people and is concerned for the people. He also sought special package for the Doaba region.