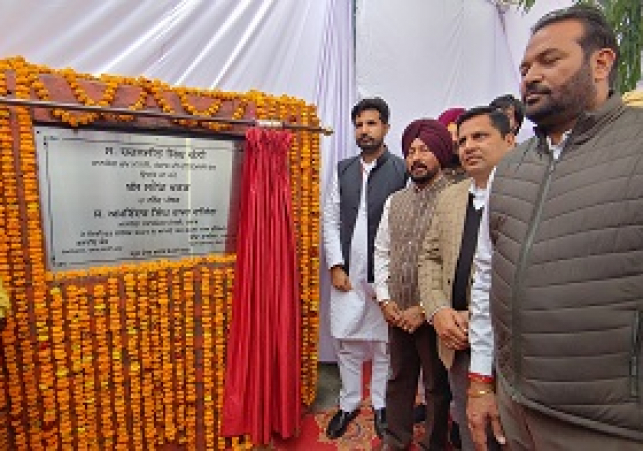 REITERATES CM PROMISE OF NO SHORTAGE OF FUNDS FOR THIS PROJECT, ALSO ASSURES SHOPKEEPERS TO BE ADJUSTED WITHIN UPCOMING COMPLEX

Giving a major fillip to the infrastructure in the region, the Punjab Transport Minister Amarinder Singh Raja Warring laid the foundation stone of the Modern Bus Stand to be built here at an cost of Rs 6.57 crores. The upcoming Hi-tech Bus Stand to be lassed with all modern amenities - a dream project of Chief Minister Charanjit Singh Channi - will be developed at the 16 kanal land of Panchayat Samiti Land in the heart of the city.

Crediting the Chief Minister for reinvigorating the much needed project which was in limbo for the last four and half years, Warring said Charanjit Singh Channi comes from a very humble background and acknowledges the concerns and aspirations of common people.

Chief Minister Charanjit Singh Channi had shared with me that he had once travelled to Kharar by bus to join an agitation and at that time buses did not stop at Kharar. The Chief Minister had then decided to ensure the city gets a proper Bus Stand and people don't get inconvenienced any further, Warring disclosed in presence of Chief Minister's brothers Manmohan Singh and Dr. Manohar Singh while addressing the gathering after inaugurating the Modern Bus Stand.

The New Bus Stand would have 5 bays for streamlining of passenger entry into buses especially for the elderly, a Cafeteria besides 34 shops, all required amenities of clean drinking water and toilet facilities besides separate male and female rest rooms, and cabins with proper signages.

There will be no dearth of funds for this project and I will ensure it is completed within the fix timeframe, Warring announced.

The CM has given me free hand to ensure we increase the revenue of state government by catching the tax offenders like Badals, the Minister said his aim is to enhance daily department revenue to 1.50 Crore daily which as of today stands at 1.05 Crore daily.

Allaying their concerns, the Transport Minister Raja Warring also assured shopkeepers that nobody's business will be impacted and they would be suitably accommodated within the upcoming complex.

Speaking on the occasion, Dr. Manohar Singh, younger brother of Chief Minister S. Charanjit Singh Channi said that the construction of bus stand at Kharar has been the dream project of the Chief Minister. He lauded the Transport Minister for his zeal and passion to serve Punjab. He also assured the shopkeepers that they would be provided shops at the new bus stand.